Many barns have up arena letters based on the dressage arena to help direct students where to go. Here is some info and fun acronyms for remembering the order of these letters! 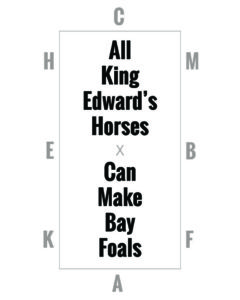 First off, why are there letters to begin with?

To instruct riders where to perform different movements, used primarily in dressage testing.

Where did the letters originate from?

The main theory: The royal stables of the Imperial German Court in Berlin has markings on the walls that indicate where each person’s horse was to stand and wait for their rider – A (Ausgang=Exit), K (Kaiser=Emperor), F (Furst=Prince), and so on – for the full list click here. The lettering spread when the German Cavalry used markings similar as in the royal stables.

These are my favorite acronyms, that I think would be easiest for riders to remember:

Here are some other great lists of all possible options!

Some riders do not identify letters easily or quickly. Here are some ideas:

(This has apparently been floating around the internet for a while, with no author to credit).

Reasons Why Dressage Arenas Are Marked That Way

#10: The letters commemorate the sites of legendary falls by 18th-century dressage masters: Karl somebody-or-other’s stallion launched him into orbit from the end of one of the long sides, Conrad bought it in the middle of the far end, Xavier’s horse got the urge to lie down and roll right in the center of the arena, etcetera.

#9: The letters *are* consecutive and in alphabetical order, in a now-extinct language spoken only by early-18th-century Hanoverian carriage horses.

#8: Hey, after riding five hundred 20m circles in rapid succession, who can remember the alphabet?

#7:The very first dressage ring was designed by the lowest-bid contractor.

#6: The letters were originally laid out by beleaguered riding pupils to facilitate pranks on their instructors, in which the pupils would pretend to be schooling various movements and figures while actually spelling out slanderous curses, in German, against their cruel and heartless instructors, their diabolical horses, and whatever silly bastard invented this dressage thing in the first place.

#5: The letters are actually advertising billboards paid for by Sesame Street (“This piaffe-passage transition was brought to you by the letter G!”).

#4: What, you mean they’re NOT in alphabetical order? Hey, that would explain why nobody else seems to understand how I’ve organized the office files…

#3: The other letters in the alphabet are *there*, all right, they’re just invisible – what do you think your horse has been spooking at all these years?

#2 Well, the letters are *supposed* to be in alphabetical order, but somebody’s Trakehner keeps getting out at night and rearranging them.

#1: So they can double as landing strips for the invasion force from Planet Lippinzinger. (The Lipp spaceship is round and white, and can go from Speed of Light to full halt in just 120 meters. Though sometimes it finishes with its haunches a little out to the left).

What acronyms do you use with your riders?

What arena letter adaptations do you use instead of or with the letters?

Note: This is not professional advice, this is a blog. I am not liable for what you do with or how you use this information. The activities explained in this blog may not be fit for every rider, riding instructor, or riding center depending on their current condition and resources. Use your best personal judgement! If you would like to contribute an activity or article, please contact me here, I would love to hear from you!

I started this blog in February of 2012 to provide therapeutic riding instructors with an online resource for lesson plans, games, patterns, teaching tips and more to help you on your journey to certification and becoming a better instructor!

For more about me and this blog, see the About page.

If you're new here and don't know where to start, visit the Start Here page!

Therapeutic Riding (TR) is riding lessons for individuals with disabilities with the goal of teaching riding skills and using the natural therapeutic benefits of the horse to achieve the rider’s life goals and contribute positively to their cognitive, physical, emotional and social well-being. The lesson is typically taught by a riding instructor with a special certification in safety standards and adaptations to teach a rider with disabilities – so it’s often also called “adaptive riding”. The instructor is not a therapist and is not providing therapy or the goal of rehabilitation. I am a PATH Intl. Certified Therapeutic Riding Instructor (CTRI). I am not an official representative of PATH Intl., but most of the things I share on this blog are related to PATH Intl. and their line of training. For more about the terminology of TR, see the Terminology II post.

$4 of each book sold is donated to the PATH CTRI Grants program for maintaining instructor certification at the EQUUS foundation.

Lessons in TR is paid for by Google Ad views and Amazon Affiliate link sales. Readers viewing ads and purchasing items through affiliate links is how I pay for the web hosting and domain name. Want to bypass the affiliate links? Just go directly to Amazon and search for the item.